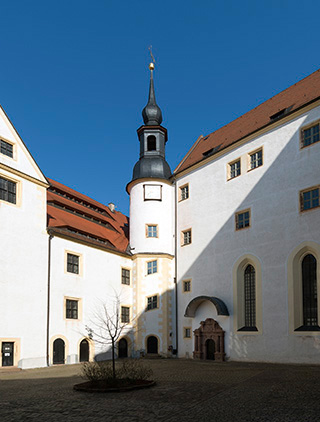 Fire-protection in a historical building


The recently renovated 'schloss Colditz' in Saxony, Germany is a great example of how to reconcile the often conflicting demands of historic preservation and fire-protection. The Renaissance castle, built in the 1520s, lies in the triangle between Leipzig, Dresden and Chemnitz. The renovation has not just fulfilled fire-protection requirements but the planners have used extremely discreet solutions that fit with historic preservation requirements. For example, many of the passageways have been fitted with the TeckentrupT30 all-glass doors, which combine functionality with aesthetics and maximum transparency.

The Colditz castle in the heart of Saxony is a magnet for tourists and, with its white gables, is one of the most beautiful 16th century buildings in Central Germany.  The majority of the splendid architecture dates back to the early Renaissance period with some portions having a late Gothic influence. Both periods are easily recognisable. The castle is not only famous for its architecture but also for the role it played during the Second World War. It was used as a prisoner-of-war camp for allied officers, including Winston Churchill's nephew. Today the "escape museum" shows the original locations of camp life and displays tools made by the captives. Concerts and guided tours are also part of the cultural programme at Colditz as the castle is home to the Saxony state music academy and a youth hostel. The building was successfully restored between 1997 and 2005. During this time the prisoner-of-war camp was rebuilt along with repairing signs of wear and tear from the war era. The 2013 to 2015 renovations focused on the castle's chapel.

Museum, tourist attraction, youth hostel - all these areas required high level fire protection which needed to be balanced with the historical preservation requirements of the building. The designer found a non-standard solution which fulfilled both sets of requirements - installing frameless Teckentrup T30 all-glass doors in the passageways. They combine modern fire-protection with demanding aesthetic requirements and blend discreetly into the background. Thanks to their transparency they were integrated unobtrusively into the historical building.

Teckentrup assisted the building owner throughout the planning process to ensure that the installation ran smoothly. Intelligent accessories such as specific transport/assembly trolleys ensured that the building site did not pose any problems. The aim in the castle was to not fill it with fire protection barriers despite installing fire protection throughout. This has been achieved in an exemplary way with the glass-door: the transparency preserves the view of traditional construction. 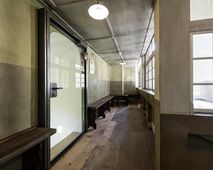